The Storm by Amanda Jennings 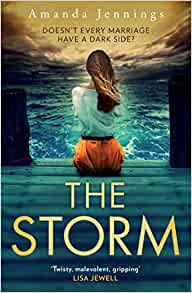 The Storm is a dual-timeline psychological suspense novel set on the Cornish coast. Hannah is trapped in a toxic marriage to a man she does not love; the only good things in her life are her teenage son, Alex, and her dog, Cass. This is a realistic and chilling portrayal of coercive control, but why does Hannah tolerate Nathan’s treatment of her?

The story is mainly told from Hannah’s point of view, with some chapters by her husband, Nathan, and others by her old boyfriend, Cam, who was a trawlerman. After an argument with his father, Alex runs away. This is the catalyst that destroys the status quo, brings Cam back to Newlyn, and forces everything out into the open.

To begin with, the secrets of the past are gradually revealed in short flashbacks that keep the story moving along, but it drags a bit in the middle with a long section on the ill-fated fishing trip and the storm. With a bit of judicious editing the reader would still have got the point, and the narrative would have flowed better. The descriptions of life at sea on a fishing trawler were both convincing and terrifying, but some of the other members of the crew were shown in a particularly unflattering light.

The characters are well drawn, even the horrible ones. Nathan is a bit of a Jekyll and Hyde character, with his public persona a complete contrast to how he behaves behind closed doors. He is truly abhorrent, but what is worse is that he seems to believe he loves Hannah, and is treating her well. Even allowing for the passing of time, Hannah is unrecognizable and a shadow of her younger self. It’s as if Nathan has  literally sucked the life out of her.

The strong sense of place shows in the vivid descriptions of the Cornish coast; I’d quite like to visit Newlyn sometime and see it for myself. I had not read any other books by Amanda Jennings, but will remedy that as soon as I can.