When Shadows Fall by Alex Gray 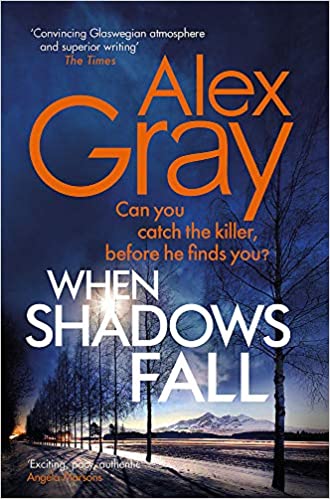 When Shadows Fall is Alex Gray’s seventeenth novel featuring Detective Superintendent Lorimer, now the head of the Major Incident Team based in Glasgow. Skeletal remains are discovered in the grounds of a large house in the West Renfrewshire countryside by the gardener, Joseph Alexander Flynn. Freaked out by his gruesome find, he phones Lorimer. They go back a long way as Lorimer helped Flynn escape his troubled past. When a bullet hole is discovered in the skull, they have to treat it as murder. This cold case seems unconnected to the recent killings of retired police officers, but analysis of the bullet still lodged in the skull tells a different story.

As the number of killings mounts up, tension is rising as to who will be next. This is greatly increased by the fact that the reader knows more than the police; we know what the killer is planning just not his identity. Can Lorimer’s team solve the case before it is too late?

One of the reasons I started reading this series was the Glasgow setting. Alex Gray brings the city to life on the page. I have, unfortunately, been away for more years than I would like, but, even after all this time, this is a Glasgow I recognise, and it makes a great setting for When Shadows Fall.

There are lot of familiar faces in this book, especially if you have, like me, been reading the series from the beginning; once again Dr Brightman’s insight helps to solve the case. Lorimer is unusual among fictional detectives in that he does not display self-destructive behaviour, but goes home every night to his wife and the cat.

Despite being part of a series, you could just as easily read this as a standalone, but I do recommend that you go back to the beginning and enjoy all the others. Alex Gray skillfully weaves the different strands of this complicated plot together into a nail-biting conclusion, and I hope that you feel like giving it a try.

Thanks to the author, Sphere and NetGalley for a review copy.

Just My Luck by Adele Parks 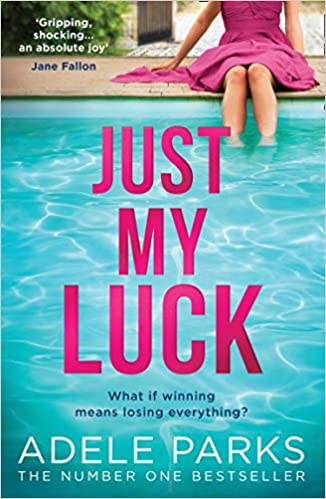 Just My Luck is the cautionary tale of what can happen after a big lottery win; never has the phrase ‘be careful what you wish for’ been more apt.

Lexi and Jake, along with two other couples, have been buying a lottery ticket with the same numbers for the last fifteen years. The others have decided they no longer want to play, and then they win the 17.8 million jackpot. To begin with Carla and Patrick, and Jennifer and Fred, still think they are entitled to a share. The three couples were supposed to be such good friends, but as more of the story unfolds it is hard to see why.

All the main characters, with the exception of Lexi, are unlikeable in some way. Although not perfect either, Lexi is the one I have most sympathy for as she seeks to do some good with the windfall.  Before the money has even been deposited in their bank account, Jake has completely lost it – buying sports cars, organizing extravagant parties and flaunting their newly acquired wealth – making ticking the privacy box no longer an option. He changes overnight, makes decisions without consulting her and sets a really bad example for their children, Emily and Logan. Has he simply been hiding his true nature all along?

Little by little, secrets are revealed and nothing is what it seems. I genuinely did not see the shocking twists and revelations coming, and found myself reading far into the night to find out what happens next. The ending is very satisfying, but you’ll have to read it for yourself.

The story is told from several points of view – mostly by Lexi, with some chapters by Emily (but there were places where her voice as a fifteen-year-old girl was not quite convincing), and occasional contributions from Toma Albu, a client of Lexi’s at the CAB, whose story seems unrelated to begin with. This is a much more complex story than it seemed at first, with one revelation after another, emphasizing the point that money can’t buy you happiness.

I have not read any books by Adele Parks before, but I was really impressed with Just My Luck and intend explore her back catalogue as soon as I can. 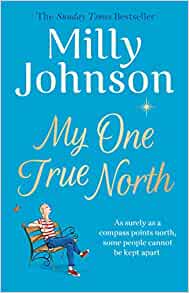 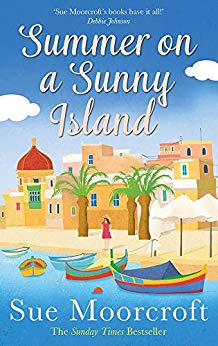 The Cat and the City by Nick Bradley 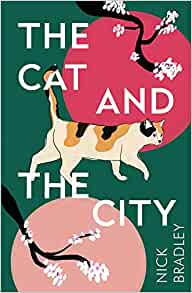 The Cat and the City is an imaginative debut from Nick Bradley; the writing is very accomplished and the concept is intriguing. It is not quite a novel, but much more than a collection of short stories. Normally, I find them very unsatisfying and disjointed, but the stories in The Cat and the City are connected, no matter how tenuously, and highlight the loneliness and alienation of living in a city with more than thirty-seven million inhabitants.

The green-eyed calico cat weaves its way in and out of the lives of the various characters in this book – some native Japanese, some foreign – and shines a spotlight on their story before moving on. The connections are not always obvious, but if you keep reading it will all start to make sense.

The writer plays with different styles – haiku, manga, science fiction to name but a few – to give us a warts-and-all portrait of life in Tokyo in the period leading up to the 2020 Olympic Games. Although written from a Western perspective, the writer displays a vast knowledge of Japanese culture that felt authentic to me (I have never been to Japan, but would love to go there someday).

I chose to read this book because of the subject matter and the attractive cover art; I was not disappointed. Obviously, I enjoyed some of the stories more than others, but overall it was beautifully written and thought provoking. Thanks to the author, publisher and NetGalley for a copy in exchange for an honest review.