The Return by Anita Frank

Set in the Berkshire countryside between 1939 and 1945, The Return is a dual timeline story of flawed and complex characters, Jack and Gwen, who are both harbouring secrets that could have a devastating effect on all their lives. It took me a while to warm to Gwen, but I was full of admiration for her tenacity and determination to give her son, Tom, the best life she could. Jack, on the other hand, is a wonderful character right from the start despite how he sees himself. He has a strong moral compass, and only resorts to violence in defence of those he cares about.

The story is structured so that we only gradually learn what Jack is running from and why he is so on edge.  Although The Return is set during the second world war, it is not a story about the war. It is a beautifully written description of the harsh reality of the sheer hard work involved in running a farm at that time, but also a lyrical portrait of the landscape and the rhythm of the passing seasons. It also highlights the contrast between the lives and behaviour of the haves and have-nots. I really liked the ending as I had anticipated a much different outcome. This is the first book I have read by Anita Frank, but it won’t be the last. Thanks to HQ and NetGalley for a digital copy to review.

The Whistleblower by Robert Peston 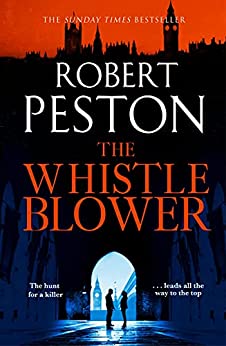 I am not normally a fan of political thrillers, but seeing that The Whistleblower was written by one of my favourite broadcasters, the award-winning journalist Robert Peston, I thought I’d give it a try. I was pleasantly surprised by how good it was considering this is not always the case when journalists decide to try their hand at fiction. Set in the run-up to the 1997 general election, he seamlessly weaves thinly disguised, real-life people into the narrative, and paints a warts-and-all portrait of what goes on behind the scenes at Westminster. If you were following the news at the time, the atmosphere of hope and desire for change will be instantly recognisable.

The story is told from the point of view of Gil(bert) Peck, political reporter for the Financial Chronicle. He is already a deeply flawed character, but his sister’s death pushes him over the edge. His guilt is overwhelming as they had not spoken for many years. As Gil’s backstory is slowly revealed we begin to feel more empathy and understand his desperate need to find out the truth about what happened to his sister.

The Whistleblower is a fast-paced thriller that lays bare the corrupt relationship between politics and the media, and how little importance is given to the needs of the electorate. It is an intelligent and readable story, with well-drawn characters, that would be a good choice for a book group discussion. I enjoyed Gil’s self-deprecating inner voice and dry humour, and the contemporary culture references, and will definitely look out for the next novel by this author. Thanks to Zaffre and NetGalley for a digital copy to review.

Returning from a college reunion, where she had been hoping to recover a letter and camera placed in a time capsule by her late friend Daisy, Noelle gets stuck on the motorway in a blizzard. She is having a bit of a meltdown, as her phone has died and she is unable to contact her mum to let her know what is happening, when someone knocks on her window to see if they can help. Sam is an American on his way to the airport, and they keep each other company for Eight Perfect Hours until morning arrives and they are able to continue their journeys. They do not exchange phone numbers, assuming they will never see each other again, but over the next few months their paths keep crossing.

I liked the way the story was put together – it might have seemed a bit contrived in places, but it works. As we only get Noelle’s point of view, the mystery surrounding Sam’s past is only gradually revealed and comes as quite a revelation. Eight Perfect Hours is charming, funny and well written with engaging characters (mostly, not keen on Noelle’s self-absorbed ex), but also highlights some serious issues that give depth to the narrative – her friend is struggling with postnatal depression, Noelle has put her life on hold to care for her mother, and she still feels guilt about her friend’s death fifteen years ago. I chose to read Eight Perfect Hours as I had previously enjoyed Dear Emmie Blue by the same author and was not disappointed – I will definitely be looking out for her next book. 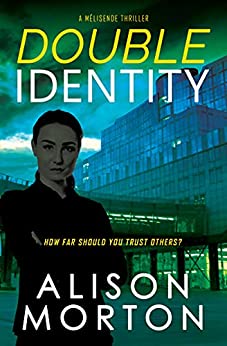 Double Identity is the first book in the Mélisende series featuring the highly skilled, special forces intelligence analyst, Mélisende des Pittones. Having recently resigned her commission to marry financial trader, Gérard, she wakes one morning to find her fiancé dead in the bed beside her and no memory of what happened. She immediately becomes the prime suspect. On clearing her name, she is seconded to a special unit, along with DI Jeff McCracken from the Met, to investigate the corruption her fiancé was involved in. She discovers he was not what he seemed, and that she did not really know him at all.

What makes Double Identity stand out from the crowd is the Europe-wide reach of the investigative team. Mélisende is uniquely placed to blend in as she can function effectively in both countries – she is fluent in both languages and familiar with their cultures. She is a strong and capable female lead, who is more than a match for any of her male colleagues, as one or two find out to their cost.

The initial animosity between her and Jeff gives the narrative an edge. They are chalk and cheese; Mélisende is wealthy and from an aristocratic French background, while McCracken is a native Londoner and officer in the Met. They work well together once they get over their prejudices, and I look forward to reading how their relationship develops over the course of the series. Double Identity has obviously been thoroughly researched as the author is very knowledgeable about financial matters, and her experience in the military shines through.

We get the story from multiple viewpoints so get a rounded picture of what is going on. This is a fast-paced thriller, with a feisty lead character, interesting European settings and the promise of  more adventures to come. I have not read any thing by this author before, but have already got the next book in the series, Double Pursuit, lined up on my kindle. Thanks to Alison Morton for a digital copy that I review as a member of Rosie’s Book Review Team #RBRT

The Daisy Chain by Maggie Ritchie

In The Daisy Chain, Maggie Ritchie paints a vivid picture of 1920s Glasgow – a time when life for women was undergoing lots of change. It follows the stories of Lily and Jeanie – childhood friends from Kirkcudbright – whose lives take them in very different directions but always bring them back together again.

Lily is a talented artist and attends Glasgow School of Art, but finds it much harder than the men to make her mark on the art world. Jeanie runs away from home and lives with show people, until she gets her big break as a dancer. While Jeanie is dancing and raising her daughter with Victor, Lily ends up living in Shanghai with Hugh, her missionary husband.  This was a time and place I knew nothing about and so found this part of the story especially fascinating and informative.

The story is told from both Lily and Jeanie’s point of view, in the present and in flashback, and the characters are well rounded and believable. I was attracted to this book partly by the striking cover art – a portrait of Anne Finlay by Dorothy Johnston from Aberdeen Art Gallery – and partly by the subject matter. I enjoyed the various references to places and people associated with art history such as Kirkcudbright, Cockburnspath, the Glasgow School of Art building and the cameo appearance by Charles Rennie Mackintosh (did you spot it?). I have not read anything by this author before but will certainly look out for her next book having enjoyed The Daisy Chain very much.