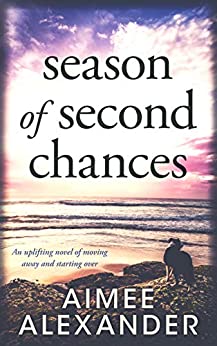 Season of Second Chances opens as Grace, with her children Jack and Holly, drives away from her life in Dublin towards a new start in West Cork where she grew up. Grace will take over from her recently retired father, Des, as a local GP; she will be ‘Young Doctor Sullivan’ to the locals.

At this point we have no idea what Grace is running away from, only that it must be serious to justify such extreme action. Initially, her father has no idea why they have come to Killrowan, but is happy to have them there. Since he retired, and found out he was in the early stages of Parkinson’s Disease, he has been feeling a bit pointless. Having his daughter and grandchildren there seems to give him a new lease of life.

The story is told from multiple points of view; we see the past, and the present, through the eyes of Grace, Des, Jack and Holly. This gives us a much more rounded picture of why they had to leave, and how they are getting on now. It also makes us realise that Simon, Grace’s husband, is not going to leave them alone. A sense of imminent menace pervades the narrative.

Aimee Alexander depicts small town life perfectly; the claustrophobic feeling of everyone knowing everyone else’s business, and putting their own interpretation on it. At first, the patients don’t want to see Grace as they are suspicious of her big city ways, but slowly, by persevering and doing a good job, she wins them round.

The ending is satisfying, but leaves just enough loose ends for a sequel which I understand the author is currently writing; I look forward to visiting Killrowan again very soon. I will also be looking out for other books by Aimee Alexander as this was the first one I read, but it won’t be the last.

Season of Second Chances is well written with believable characters, a great location, and humour to offset the seriousness of the underlying threat. As the full extent of the abuse is revealed, Grace finds the strength and courage for a new beginning. I loved the way she realised that she could do whatever she wanted, now free of her husband’s controlling influence – simple things like what she wore, how she styled her hair and being able to spend time with friends both old and new.