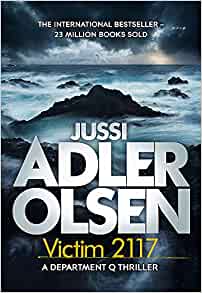 Victim 2117 is the eighth in the Dept Q series of novels, set in Denmark, featuring Inspector Carl Mørck and his colleague Assad. I read and enjoyed the first couple of books a few years ago, and watched the excellent movies, but did not feel at a disadvantage that I had not read the other books in the series; this works perfectly well as a standalone, as any backstory is seamlessly inserted into the narrative.

The story is told from multiple points of view which gives the reader greater insight into what is going on than the police. It is a complicated plot that requires Carl and Assad to work with the German police in order to prevent a terrorist atrocity in Berlin.

Up until now Assad has been quite an enigmatic character – his colleagues do not know much about him. When refugees from Syria are washed up on the beach in Ayia Napa, the pictures are in newspapers all over the world. Assad recognizes faces from his past and is shocked into revealing his story. It is a harrowing tale, quite difficult to read in places, but very topical as it deals with refugees, the situation in the Middle East and the constant threat of terrorist plots. It is also personal – someone from his past is sending Assad a message, clearly with revenge in mind.

Alongside the main investigation, a secondary plot strand (no spoilers) could easily have been omitted, as I felt it was a distraction, but it did highlight the psychological effect of violent computer games on impressionable youth.

The characters are well drawn and believable and, despite the upsetting subject matter, the story is thrilling and entertaining. The ending is a terrifying race against time with the suspense ramped up to the max.

Thanks to the author, Quercus and NetGalley for a review copy.