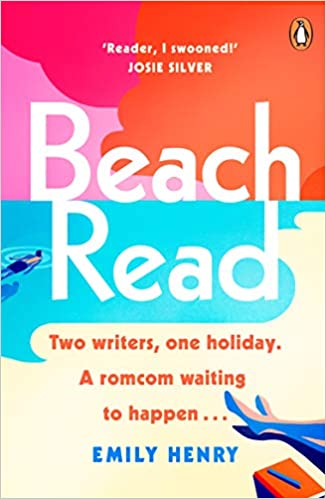 Beach Read is marketed as a light-hearted romantic comedy, but it is actually quite hard to place in any particular genre; it’s neither one thing nor the other. The cover, while attractive to look at, is very misleading.

January and Gus end up living next door to each other on the shores of Lake Michigan. Both are published authors having trouble with writer’s block. They hatch a plan to swap genres to see if this will inspire them, and offer to help each other with their research. This is the interesting part of the story, as the writer explores why men can be so snooty about books written by women. I would have liked more on this subject, and less about the ‘Cult’ subplot which felt like it was in the wrong book.

The writing was good, but I did not like either of the main characters, and their romance felt contrived. Part of the problem was that the story was told solely from January’s point of view; in this case it did not work for me. Alternate chapters from both main characters might have given a more balanced view.

The lakeside setting was underused – it seemed strange that they rarely went to the beach – considering the book’s title and cover. There were a lot of repetitive phrases that became a bit annoying, and some of the dialogue was very cheesy. January, especially, did not come across as a mature adult.

Judging by the number of five star reviews for Beach Read, I realise that I am in a minority. Sometimes you just can’t put your finger on why a book does not appeal.

Thanks to Penguin and NetGalley for a review copy.