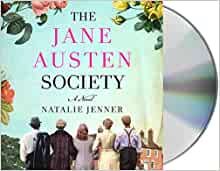 The Jane Austen Society is a fictional account of how the society came into being, in the Hampshire village of Chawton, just after the second world war.

This is where Jane Austen lived for the last few years of her life, and where she wrote some of her best known works. Love for her writing brings this diverse group of people together; most of them live in the village, with the exception of the American movie star, Mimi, and her friend from Sothebys. They are all suffering in one way or another and find solace in Jane Austen’s writing.

The pace is slow to begin with, as we are introduced to all the characters and their backstories, but picks up after the reading of Mr Knight’s will when the society’s task becomes more urgent. It does not help that Jane Austen was in no way as popular then as she is now.

While you do not need to have read the works of Jane Austen to make sense of this story, it would certainly enhance your enjoyment as there are echoes of some of her stories in the relationships in the book. The period detail is good on the whole, but there are some jarring words and phrases that would definitely not have been used in Chawton in the 1940s.

The Jane Austen Society is beautifully narrated by Richard Armitage, whose skill makes it easy to differentiate between the many characters. I had not read anything by Natalie Jenner before, but will definitely be on the lookout for her next book.