My Hands Are Tied by Sean Campbell 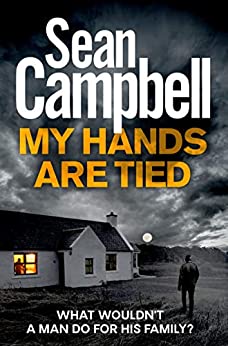 In My Hands Are Tied, DCI David Morton and his wife, Sarah, are invited at the last minute – only a fortnight before – to their son’s wedding, and find themselves at Terra Farm; home to the Collective, and now to Stephen and Abigail, the future daughter-in-law they have yet to meet. The entrance is hidden behind high hedges and a security gate where they are asked to surrender their mobile phones. This level of security all seems a bit much to DCI Morton, but he goes along with it, not wishing to rock the boat. His relationship with his son is difficult enough already without him ruining the ceremony that is about to take place.

When they eventually get inside, Terra Farm is not what they were expecting. It is more like a small village tucked away in a valley, hidden from sight, but actually very close to civilization in SW London. At the centre is the barn, where the ceremony is due to take place, surrounded by eight bungalows, most of which are a bit ramshackle and rundown.

What follows is a bit of a homage to classic detective stories and the ‘country house’ mystery where all the characters are trapped inside, and the detective has his work cut out discovering who the killer is. Here it is a gated commune, dedicated to living an alternative lifestyle, where everyone has something to hide.

Having had a few too many beers after the ceremony, DCI Morton is forced to stay the night. He is woken in the morning by the sound of gunshots; one of the commune members, Guy Rosenberg, has been murdered. Worried that his son might end up being wrongly charged with the crime, he goes against protocol and carries on investigating, when he should have handed the case over to another officer, hoping to find the killer before the weekend is over. Losing his job doesn’t seem to bother him as he was near retirement anyway, but I thought his lack of concern over losing his pension, if found out, was a bit unbelievable.

The story is well written and the characters fleshed out and believable, even though some of them are decidedly weird, but something about this book just does not work for me. This is number seven in a series, but the police officers working on the case did not convince me that they were part of a team. One striking omission is the lack of humorous banter usually found in crime novels.

I have not read any of the other books in this series, but, while the story worked perfectly well as a standalone, perhaps I would have gained some insight into why this team were not convincing if I had read the series from the beginning.