The Less Dead by Denise Mina 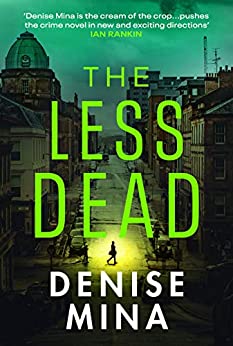 The Less Dead is a stand-alone novel from award-winning Scottish crime writer Denise Mina.  Following the death of her foster mother, GP Margo goes in search of her birth mother. She is shocked to discover that her real mother, Susan, was a drug addict and a sex worker; she was also brutally murdered, only months after Margo’s birth, and her body dumped at a bus stop in Easterhouse. She arranges to meet Susan’s sister, Nikki, and enters a world so outside of her comfort zone that she is not sure if she wants to go any further.

The story is split between the 1980s and present day, and highlights the contrasting attitudes between then and now; it also makes it obvious that some things have not improved. The title refers to those, like Susan, whose deaths are not considered to be important enough to warrant a thorough investigation, and, unsurprisingly, the killer has never been brought to justice.

Mina brings Glasgow to life – warts and all – in this gripping tale, and shines a light on the dark side of masculinity. The story is mostly told from Margo’s point of view, but there is another voice, anonymous, in the shadows, full of poison and hatred. Both Nikki and now Margo receive letters – taunting them – alleging that they are from the killer. It is unclear where the threat is coming from, and this makes for a very tense and unsettling read.

The characters are well written and thoroughly believable. At the beginning of the book, I found Margo unlikeable and hard to empathize with, but by the end she has changed and become stronger. I did find her treatment of her boyfriend Joe a bit puzzling though. In contrast, Nikki has sorted herself out but still no one will listen to her; all she wants is Margo’s help in catching her sister’s killer.

The Less Dead is not a police procedural, but an intelligent and gripping crime thriller that shines a sympathetic spotlight on attitudes to sex workers, drug addiction and deprivation in the dark underbelly of Glasgow. Full of menace and dark humour, this unusual book will definitely make you stop and think.

Thanks to Vintage and NetGalley for a digital copy to review.