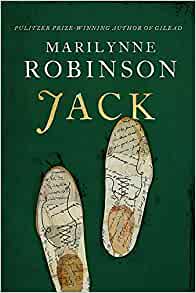 Jack is the fourth volume in the ‘Gilead’ series by prize-winning author Marilynne Robinson, which I did not know when I requested it, and started reading. Having said that, I have no desire to read any of the earlier books as most of the religious content does not interest me. I was drawn to the developing relationship between Jack and Della, and the difficulties they encounter.

Jack is just out of prison for a crime he did not commit, though there were many others he was guilty of. He helps Della when she drops some papers and, mistaking him for a man of the cloth, she invites him home for tea. Jack is portrayed as the black sheep of the family – not having read the other books I have only this story to go on. He does not seem to be a bad man – just down on his luck – but then we are seeing everything through his eyes.

I found the racial discrimination described in this story deeply upsetting. Despite knowing the history, and that segregation existed, reading about Jack and Della’s struggles made it all so much more vivid and real. What surprised me most was why Della’s family objected to their relationship.

Despite their obvious differences, they have things in common; both come from religious families with a preacher for a father, and they are united by their love of literature and poetry.

Almost the first third of the book consists of one long scene in a graveyard; Della is locked in overnight, and Jack is planning to sleep there as he has rented out his room to make some money. This is a bold move by the author, and contains some witty dialogue, but could have been shorter without losing its impact.

Despite believing that the only way he can ‘do no harm’ to other people is to isolate himself, he is repeatedly drawn to Della, even knowing that she has much more to lose than he does.  We are not privy to Della’s thoughts, but she stands to lose her home, job and reputation and so is not entering into this relationship lightly.

Marilynne Robinson writes beautiful, lyrical prose that deals with a myriad of themes: racial prejudice, religious faith, family relationships, alcohol dependence to name but a few. Take away all the religious dogma, and it’s an almost timeless story of love and redemption.  It is overlong with a bit too much of Jack’s repetitive introspection, but it gives us a fascinating portrayal of life in the segregated southern states of the US in the 1950s.

Thanks to Little, Brown Group and NetGalley for a digital copy to review.