The Miseducation of Evie Epworth by Matson Taylor 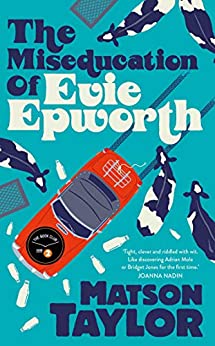 The Miseducation of Evie Epworth is one of my favourite books of 2020. Set on a farm in Yorkshire in 1962, Evie is sixteen-and-a-half years old and trying to decide what direction her future will take. Everyone around her seems to have an opinion, and while Evie may be naïve she is no pushover; she will make up her own mind.

Evie’s mother died when she was very young, but flashbacks help to keep her included in the narrative, and also show her father in a more sympathetic light. At the beginning of the book their housekeeper, Christine, has moved in, and is going to marry Evie’s father. Evie is not happy as she can see right through Christine, and is not fooled by the act her father has fallen for.

The Miseducation of Evie Epworth features a cast of sharply observed, strong female characters, each with their own unique voice. Matson Taylor has done a wonderful job of creating the voice of a believable and endearing teenage girl, and this is especially important because we see the world entirely through Evie’s eyes. Christine personifies the wicked stepmother stereotype with her scheming, plotting and downright nasty behaviour – for some reason she reminded me of the female character, Piella Bakewell, in the Wallace & Gromit film A Matter of Loaf and Death.

Evie enjoys spending time with her neighbour, Mrs Scott-Pym, who was a friend of her late mother and can share memories with her. When Mrs Scott-Pym is injured in a fall, her daughter, Caroline, comes home, and Evie suddenly has someone else fighting her corner. Caroline lives a glamorous and sophisticated life in London, and opens Evie’s eyes to all sorts of new experiences.

The period detail is spot on; even though I was slightly younger than Evie in 1962, I can still remember it all quite clearly. When she hears the Beatles for the first time, she is smitten and Adam Faith is consigned to history.

At times I laughed out loud while reading this book which has just the right balance between humour and sadness. Evie has her whole life ahead of her, and I look forward to reading the next instalment.