Rescue Me by Sarra Manning 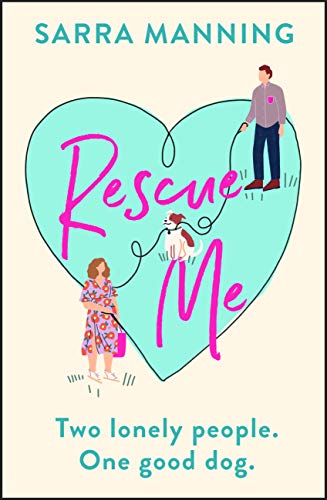 In Rescue Me by Sarra Manning, Margot has been rejected by both her boyfriend and her cat, and decides to get a dog from the rescue centre. She falls for Blossom the Staffie but can’t take her home right away. Will is only looking to volunteer as a dog-walker on the advice of his therapist, but agrees to take Blossom until Margot returns. This is where the trouble starts; they both want to keep her but agree to share, taking turns looking after her.

The pace is quite slow to begin with, allowing the main characters to get to know and like each other before they become romantically involved. Rescue Me also features a large cast of supporting characters who are well written and easy to differentiate. He may not always appreciate them, but Will has family behind him. Margot, on the other hand, feels her lack of family keenly, having been completely on her own since the death of her parents many years before.

Both Margot and Will are suffering – just in different ways – and the serious issues are dealt with sensitively, and seamlessly worked into the narrative. It is only as they become comfortable in each other’s company that they are able to gradually open up about their past experiences.

The story is told in alternating chapters by Margot and Will. This gives us a more rounded picture than if we only saw the world through Margot’s eyes, and helps to make the growing attraction between them more believable.

Towards the end, I felt the ‘miscommunication’ trope was taken a bit too far to be believable. Several times Margot cut Will off before he could explain how he felt, and this dragged the ending out unnecessarily. Right from the beginning I found Margot harder to like than Will, and just when I had started to warm to her, she reverted to being all prickly and brittle again.

I chose to read and review Sarra Manning’s Rescue Me because I had enjoyed several of her earlier books (Unsticky, It Felt Like a Kiss, 9 Uses for an ex Boyfriend), and not because of Blossom the Staffie – I’m more of a cat person. Having said that though, Blossom is a very endearing character – not to mention fairly integral to the plot – despite being such a handful.

Overall, I really enjoyed Rescue Me, and plan to catch up with the other Sarra Manning books I have not read yet. Neither of the main characters are particularly likeable at the beginning of the book, but having to communicate with each other while sharing responsibility for Blossom brings about a change for the better; Blossom really is the star of the show.

Thanks to Hodder and NetGalley for a digital copy to review.