All About Us by Tom Ellen 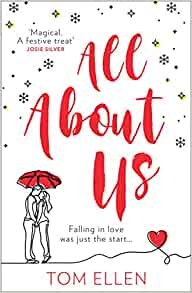 All About Us is an unusual time-travel novel that raises the intriguing question of whether past decisions were the right ones. In this modern interpretation of A Christmas Carol, Ben is at a crossroads in his life, and contemplating action that will destroy his marriage.

As a university student Ben thought his future was with Alice. Then, while taking part in a Christmas drama production, he met Daphne. The story opens fifteen years later – he and Daphne have been together ever since, but are currently going through a rough patch, and Ben is wondering whether he made the right decision all those years ago. In the pub on Christmas Eve, Ben meets a mysterious old man who insists on giving him a watch that is stopped at 23.59.

He wakes up in his old room at university, on the day of the play, and relives the experience, with the benefit of hindsight, and realises that everything did not happen exactly as he remembered it. He then goes on to relive several other days around Christmas time, causing him to reassess what he previously thought had happened, and his own behaviour; he also gets a tantalizing glimpse of what his future might hold.

It is unusual for me to read a book in this genre by a male writer – a story about love, grief and second chances. Written from the point of view of Ben, we get an insight into his struggles with his mental health and self-esteem; also the long-term effects of his non-existent relationship with his absent father. Although he can’t alter anything that previously happened, he can change what he does next.

I really enjoyed this well-written, thought-provoking story, and will certainly be on the lookout for other books by Tom Ellen.