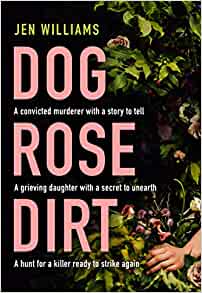 Heather has come back to her childhood home following the death of her mother, Colleen, who committed suicide and left a very ambiguous note. Heather had left home at sixteen and had had little contact with her mother since then. While searching for clues about her mother’s past, she finds a bundle of letters from a convicted serial killer.

In the news, a serial killer is again at large and his methods are remarkably similar, but how is this possible? Heather takes the letters to the police and gets permission to visit Michael Reave in prison. What gradually comes to light is a horrific story involving child abuse, grooming and weird goings-on at a hippy commune in Lancashire.

Dog Rose Dirt is well written and very disturbing, but the plot does not quite work for me. Some of the characters, especially DI Ben Parker, were not developed enough; they just seemed to be there to move the plot along. There were so many references to fairy tales, wolves, feathers and dead birds thrown in that it all became a bit confusing and cliched. Heather was quite difficult to empathise with, especially as she made some seriously stupid, reckless decisions. Just when I thought I had figured out what was going on, the ending completely took me by surprise.

I read a lot of mystery thrillers, but Dog Rose Dirt veered slightly too far into the horror genre for my liking. I had to stop reading it before I went to sleep as I found the atmosphere very creepy.

Thanks to Crooked Lane Books and NetGalley for a digital copy to review.