The Cursed Girls by Caro Ramsey 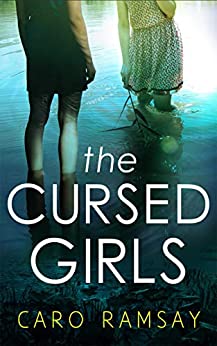 Having previously enjoyed her Glasgow-based Anderson and Costello detective series, I thought I’d give this standalone psychological thriller by Caro Ramsey a try. The Cursed Girls is very different but equally compelling. Set on a country estate in the west of Scotland, overlooking the Holy Loch, this story takes us behind the scenes at the Melvick family ancestral home, the Italian House. After an absence of three years, Megan has returned to say goodbye to her older sister Melissa who is dying; their relationship had always been difficult, but her father was keen for her to return.

There are a lot of unsolved mysteries surrounding this family, who believe themselves to be cursed, and a sense that everyone has something to hide. Why did Megan lose her hearing as a small child (she was not born deaf), where did her mother go when she vanished all those years ago, and who caused the fatal explosion at Melissa’s wedding?

The story is told from Megan’s point of view, with flashbacks from Carla, and they have very different narrative  voices. Megan is trusting and naïve, and believes everything people tell her; Carla is tough, streetwise and trusts nobody. This way we get a much fuller picture of what went on.

The Cursed Girls is well written, with believable fully fleshed out characters and a wonderfully atmospheric setting in the wilds of Argyllshire. The slow beginning sets the scene, and the build-up of tension as secrets are gradually revealed lead to a kind of Agatha-Christie-style finale where DS Murray brings everyone together to reveal what he has discovered; there are other references to her as well if you know what you’re looking for.

Throughout the book there is a sense that nothing is as it seems on the surface. It starts off with a lot of questions, and under each layer that is revealed there is another, and another, until we finally get to the truth. I enjoyed this story immensely and kept on reading it late into the night.

Thanks to Black Thorn, Canongate and NetGalley for a digital copy to review.