Out of the Silence by Owen Mullen 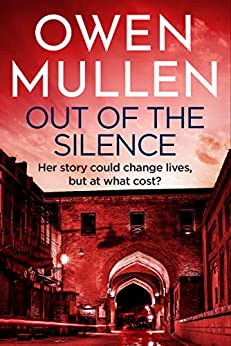 In a village in the Punjab region of Pakistan, Afra and Jameel want to marry and spend the rest of their lives together, but her mother does not agree. After being refused permission to marry Afra, Jameel leaves his village and sets off to find his only relative in Lahore. He is welcomed by his uncle and goes on to become a successful business man, but he never forgets Afra. Meanwhile, Afra is sold to a wealthy family in Lahore to become the wife of the oldest son. They are horrible to her right from the start, but when she does not give him an heir, she is reduced to the role of household slave and treated appallingly. Years later, members of this prominent family are being killed off, one by one.

Owen Mullen skillfully  weaves the strands of the story together, leading us up many false paths until we learn who is behind the killings. I did guess eventually, but only at the very last minute. The writing is evocative, full of rich descriptions of the sights, sounds and smells, and brings this area of Pakistan to life. I have never been to this part of the world, but had no trouble imagining the setting in vivid colour.

This story left a lasting impression on me; long after I had finished reading I was still thinking about what Afra (and others like her) had suffered during her short life. This is a misogynistic society where animals are treated better than women. Out of the Silence is a shocking exposé of the abuse suffered by women at the hands of their husbands, brothers, cousins, and men in general. While it is extremely upsetting to read, it has been written with compassion and understanding. It is also a gripping murder mystery. The characters are well written and believable; some you will hate with a vengeance, and others will go straight to your heart.

I chose Out of the Silence without reading the blurb as I had enjoyed other books by Owen Mullen (crime thrillers set in Glasgow) and, though it is very different, I highly recommend it, and suggest you try some of his other books too – you won’t be disappointed.

Thanks to Bloodhound Books and NetGalley for a digital copy to review.