So It Began by Owen Mullen 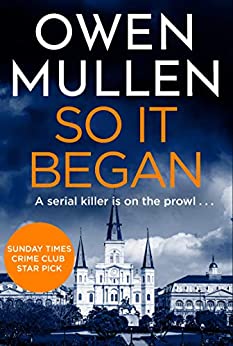 I had previously enjoyed Owen Mullen’s Glasgow-based series featuring PI Charlie Cameron so I was intrigued to try So It Began, which is a crime thriller set in New Orleans introducing us to PI Vincent Delaney. The location may be very different, but the writing and storytelling are excellent as always and I have now added New Orleans to the list of places I’d like to visit in America.

It is seven years since Delaney worked as a police officer, but when he is asked to help NOPD and the FBI with a joint investigation into a serial killer targeting children performing at pageants all across the country he cannot refuse. At the same time, he is investigating the extortion of shopkeepers in the North Le Moyne area of the city by corrupt police officers, and is looking over his shoulder for an escaped criminal, Julian Boutte, seeking revenge for the death of his brother.

I don’t particularly enjoy reading about the murders of children, but here the main focus was on catching the killer, rather than dwelling on the crimes themselves, and thankfully it was all handled with great sensitivity. The separate plot threads are woven together and brought to a conclusion in such a way as to suggest this may be the beginning of a series; I certainly hope so.

The story is told mostly through Delaney’s character, and his droll inner monologue lightens the darkness of the story. He is likeable and believable, with a cast of well-drawn supporting characters especially his music-loving dog, Lowell, who steals the show. There are also chapters giving us more detail about the children taking part in the pageants, and their families, so that we see them as real people and not just statistics. So It Began is a tense and gripping thriller with a great setting, that will keep you up late into the night as you just have to read one more chapter.

Thanks to Bloodhound Books and NetGalley for providing me with a digital copy to review.