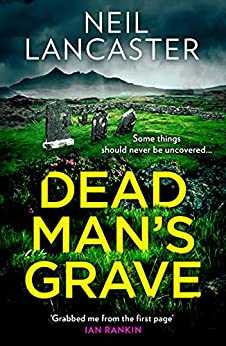 Dead Man’s Grave is a fast-paced and tense crime thriller, about revenge and a feud dating back to the nineteenth century, where corruption is discovered at the highest levels of Police Scotland. A former soldier, and officer with the Met, DS Max Craigie is now based at Gartcosh working for the Serious Organised Crime team. Although a native Scot, he does not quite fit in. DC Janie Calder, a privately educated graduate on the fast-track to promotion, is also having a hard time being accepted. Perhaps this is why they work well together when sent to investigate the disappearance of Tam Hardie, head of the most powerful criminal family in Glasgow, if not the whole of Scotland.

Tam is terminally ill and researching his family history when he goes missing; his last communication with his sons was rather cryptic. With only his mobile phone data to go on, Max and Janie narrow the search area down to somewhere in Caithness. It then quickly becomes apparent just how far the reach of the Hardie family into Police Scotland actually is. Desperate measures are called for as they can trust no one. Tam Hardie’s sons are not just mindless thugs, but educated and subtle villains who should not be underestimated.

Dead Man’s Grave is the first book I’ve read by Neil Lancaster, and I was so impressed I bought his Tom Novak series – Going Dark, Going Rogue and Going Back. If you have not discovered them yet, you are in for a treat. Unfortunately, there are only three of them, but hopefully there will be more. Neil’s background as an officer in the Met gives an authenticity to his writing, and the Scottish setting ensures this series will be a must-read for me. Max and Janie are well-written and credible characters, and I look forward to reading how they develop as the series goes on. Look out for The Blood Tide early next year. Thanks to HQ and NetGalley for a digital copy to review.