Picture Not Perfect by DE Haggerty 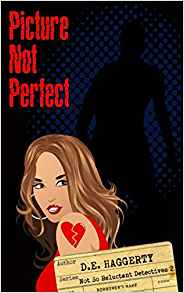 This is the second book in the ‘Not So Reluctant Detective’ series set in a high school in Milwaukee. Melanie is the school guidance counselor and her friend, Terri, is the librarian. Although it can be read as a standalone, I think you would understand more about Mel’s behaviour if you read them in order (first book is Terri’s story).

Mel is accused of the murder of a teacher; although he was creepy, and kept asking her out, he was not stalking her as the police claim. Determined to prove her innocence before they lock her up, Mel‘s impulsive behaviour leads her friends into a lot of hilarious escapades, some more dangerous than others.

One thing that did seem over the top was the reaction of her police officer boyfriend, Owen, when she did something stupid and reckless (Terri’s boyfriend was the same in the first book). Mel’s impulsive behaviour is revealed to be because of ADHD; it is unusual to read about it in an adult though it is handled sensitively.

There is a lot of humour in this book, and we laugh and cringe in equal measure at the antics of Mel, Terri and their new friend, Pru. Although Mel can be exasperating it is hard not to like her. I enjoyed this short, light-hearted mystery and have already ordered the next one, Hide Not Seek.