One For Sorrow by Helen Fields 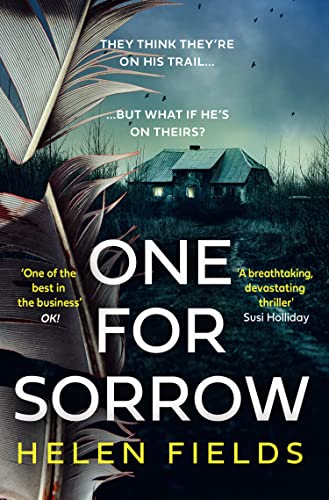 I recently read The Shadow Man by Helen Fields and enjoyed it very much, so decided to go ahead and read One For Sorrow even though I knew it was the seventh book to feature DI Luc Callanach and DCI Ava Turner. I normally prefer to start at the beginning of a series, but had no trouble reading this as a standalone, and also have six more books to look forward to.

One For Sorrow opens with the shocking death of Ava’s friend, the pathologist Ailsa Lambert.  What follows is a series of bombings aimed at hurting as many of the emergency services as possible. They are tipped off and led into a trap by a very twisted killer who knows they have no choice but to respond. Parts of this story are very difficult to read, but also hard to put down. The story is told solely from DCI Turner’s point of view, and it takes a long time to work out the reason behind the horrific attacks, which keeps the reader turning the pages.

The story is told mainly in the present with occasional chapters headed ‘before’ that relate to a young woman called Quinn becoming involved with a man who resorts to coercive control, stalking and date rape before she sees him for what he is and breaks up with him. The two narrative strands continue with no obvious link between them. Both stories are equally compelling as you try to work out how they are connected. The police are also struggling to find any leads as to who is responsible, making it difficult to predict who the next target will be.

One For Sorrow is a cross between a police procedural and a psychological thriller. There are lots of twists and turns before the bomber’s identity is finally revealed.  The characters are well drawn and convincing, often resorting to the usual black humour and banter to offset the grim reality they face every day. It is a tense and gripping read, with a strong sense of place and a shocking ending. I hope Helen Fields does not make us wait too long for the next book in this series. Thanks to Avon and NetGalley for a digital copy to review.