No Less the Devil by Stuart MacBride 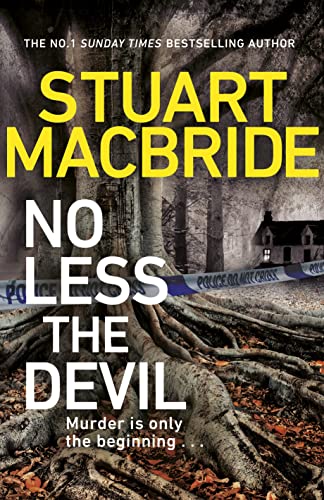 While disappointed not to have a new Logan McRae novel to read, I am always happy to read anything written by Stuart MacBride. No Less the Devil is a standalone, set in familiar fictional  Oldcastle like the Ash Henderson series, and highly unusual crime thriller.

It is a fairly long book, though you tend not to realise when reading on a kindle, and it takes a little while to get going as we are introduced to the main characters, DS Lucy McVeigh and DC Duncan Fraser. It is seventeen months since the ‘Bloodsmith’ killed his last victim, and the police are no closer to catching them. Lucy and Duncan are given the task of revisiting the crime scenes to look for anything that might have been missed the first time round. It becomes obvious that the killer was refining his technique with each victim, but it is not clear why they were chosen.

Added to the mix is Benedict Strachan, who killed a homeless man when he was eleven, and has now been released from prison. He thinks ‘they’ are after him – is it paranoia or is he right? Told entirely from Lucy’s perspective, we have no insight into the killer’s mind. The plot is complex with many dark themes running through it, and a very strange boarding school (more than usual) at the centre. It took me a while to warm to DS McVeigh, but by the end of the book I at least understood her better.

To begin with No Less the Devil seems to be a typical Stuart MacBride story, with his wonderfully descriptive writing style, amusing banter and black humour, but then there is a twist that turns the whole thing on its head and makes you doubt everything you have already read. It’s very entertaining, but won’t appeal to everyone, and the ending seems to suggest that there may be more to come. Thanks to Bantam Press and NetGalley for a digital copy to review.