The Silver Serpent by Scott Mariani 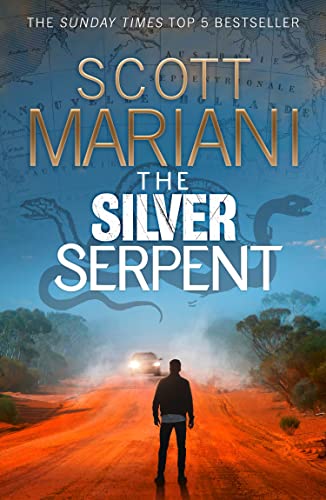 It is much harder to write a review of a book like The Silver Serpent that is part of a long-running series than if it was a one-off. You are in danger of repeating yourself to some extent, and can struggle to find something original to say. At the heart of all successful series are the characters and the worlds they inhabit. They find themselves faced with a different situation each time, but ultimately you keep reading to see these characters do what they do best, and overcome whatever obstacle is put in their path. Whether they are action heroes like Ben Hope, police officers or forensic archaeologists the principle is the same.

Ben Hope’s twenty-fifth adventure takes him to the remote Northern Territory of Australia (I had to get the atlas out), where his friend Jeff’s step-father, Kip, has disappeared, and his mother is understandably frantic with worry. Kip has recently inherited a vast tract of land from his uncle Mick, rumoured to be the location of huge silver deposits that Aboriginal legend calls the ‘silver serpent’, but its exact location has never been found – much to the annoyance of Wiley Cooper, a ruthless local mine owner, with an army of hired guns, determined to get his hands on it at any cost.

The characters are well drawn and believable, some of them extremely nasty, and the setting is vividly brought to life. The immense distances between locations, the extreme heat, and the rough terrain all make Ben’s task more complicated, but he enlists the help of pilot Abbie Logan and has soon worked out what he needs to do. The Silver Serpent is a character-driven adventure story with a gripping plot that moves along at a fast pace and keeps you turning the pages. It is thanks to Scott Mariani’s skill as a writer that this series is still as compelling today as it was at the start. I’m sure I’m not alone in hoping that there will be many more Ben Hope books to come.