The Love Child by Rachel Hore 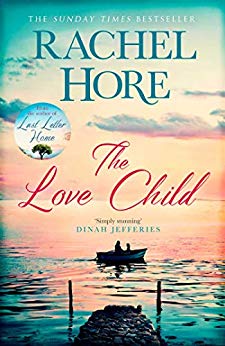 As is usual in Rachel Hore novels, The Love Child has a dual time-line. In 1917, while nursing in France, Alice falls in love with Jack. He is killed before they can marry and she discovers she is pregnant. With no choice but to have the baby adopted, Alice still finds it hard to forgive her step-mother, Gwen. Unusually for a woman at that time, Alice goes on to become a doctor. She never tells anyone about the baby she had to give away, even her husband Fergus.

The baby, meanwhile, is adopted by Philip and Edith, who have not been able to have any children of their own, and is named Irene. They then go on to have a son called Clayton, who is his mother’s favourite. Irene has a difficult relationship with her adopted mother, especially after the death of her father. She knows she was adopted and tries to find her birth mother, but this was not an easy task back then.

We follow their stories in the period between the wars as Alice becomes a GP and Irene moves from Suffolk to London to work in an art gallery. The historical detail is fascinating and makes you realise just how much women’s lives have changed since then, and how much they have not. Alice and Irene both have difficult relationships with their mothers, but they eventually make peace with the past. I really enjoyed reading The Love Child and will go back and catch up with a couple of books by Rachel Hore that I have not read yet. She writes such believable characters and gives you a history lesson into the bargain. Thanks to the publisher and NetGalley for a copy in exchange for an honest review.