Beyond the Point by Damien Boyd 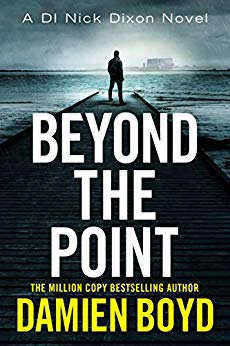 The opening section of Beyond the Point is a continuation of the story in the previous book, Deadlock. I have read all the books in this series, but even so had to rack my brains to remember what had happened in a book I had read over a year ago (I cottoned on eventually). Some reviewers have even had to go back and read Deadlock again. This is a minor quibble, but might be off-putting for a reader who is new to the Nick Dixon books.

As always, the main investigation is a complex one that requires Nick and his team to delve back into old cases until the motive becomes clear. A lot of the action takes place in the unusual setting of the construction site for a new power station (Hinkley Point C). This is a restricted area and further complicates the investigation, bringing Nick Dixon into conflict with senior officers. Like most other fictional detectives of his rank, he does not have a lot of time for his media-conscious, budget-obsessed superiors, but does not let it hold him back from doing what he needs to do.

Another thread to this gripping story is the poisoning of Dixon’s dog, Monty; as if he did not have enough to contend with. As regular readers will know, Dixon’s favourite way to wind down, and think about the case he’s working on, is to take Monty for a walk on the beach at the end of a long hard day. Nevertheless, he manages to stay focussed on the case as he waits for news of Monty.

Beyond the Point is the ninth book to feature Nick Dixon and his colleagues; one of the reasons I really like reading a series like this is that you are already familiar with the team of detectives, you don’t have to spend time becoming acquainted with them, and you can just jump straight into the story.

The Somerset countryside plays a large part in these books and, if made into a TV series, would surely do for the tourist industry there what the books by Ann Cleeves have done for Shetland and Northumbria. As I didn’t read this immediately when it first came out, there is not long to wait now for the next in the series, Down Among the Dead. I hope there will be many more books in this series.