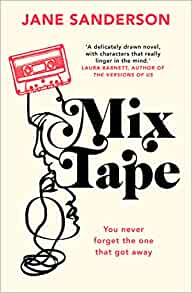 Music is powerful; hearing a particular song can transport you right back to your youth, and evoke vivid memories of times gone by. Alison and Dan reconnect, after more than thirty years, by sending each other links to songs with memories from their youth, and new ones they’ve heard since. Mix Tape is a clever idea – using songs to convey emotions. If you are familiar with the songs used in the book, you will have a deeper understanding of what is going on. On the other hand, there is a Spotify playlist that you can listen to as you read. Being of a certain age, I knew most of the songs (and remembered making mix tapes on cassettes) but I did discover a few new ones.

Alison and Dan fall in love while still at school; drawn together by their love of music. When Alison just vanishes one day, Dan is heartbroken and unable to find out where she has gone. She had always kept her horrific home life a secret from him, preferring to spend time at his house.

We only find out what prompted her flight quite a lot later, and it is shocking. Jane Sanderson deals sensitively with some fairly serious subject matter in this book – alcoholism, domestic violence, rape, homophobia. There is also the theme of too many people thinking they know what’s best for others, and their actions having far-reaching consequences.

Mix Tape is well written with believable characters that you care about (mostly). I loved Alison’s relationship with Dan’s father, Bill, and how they bonded over his love of his homing pigeons. Right from the start I took a dislike to both Michael and Katelin; I’m not sure if this was the author’s intention, or it was just me. There are also several quirky characters that add colour to the narrative – Sylvia and Dora, and Dan’s neighbours at the houseboat.

Told from the alternating points of view of Dan and Alison, both in the past and present day, the various locations are brought vividly to life – Sheffield, Adelaide, Edinburgh and Little Venice (where the houseboat is moored). Dan’s life as a music journalist has obviously been well researched as it is completely convincing. This would make an interesting film – great locations and the soundtrack is already in place.

I had not read anything by Jane Sanderson before but I will definitely be on the lookout for her other books. I really enjoyed Mix Tape; it was heartbreaking in places, but also joyful and uplifting. It shows the power of music and memory, and I can’t imagine living in a world without music.

Thanks to the author, publisher and NetGalley for a copy in exchange for an unbiased review.