The Break Up by Tilly Tennant 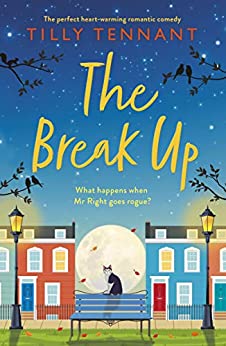 Originally titled A Cat Called Cupid, this is the story of Lara and Theo who both think that a grey tabby – known as both Fluffy and Satchmo – is their cat. As cats will do exactly as they please, they must share him, but therein lies the problem.

Fluffy appeared at Lara’s door when she really needed a friend, and has helped her cope with the betrayal of her boyfriend getting together with her best friend. After this double whammy it is no wonder that Lara is not in the mood for romance, but concentrates instead on setting up her new business, Songbird Wedding Services.

Theo plays saxophone in a jazz band, and the rancour between him and Lara gets much worse when the band turn up to play at a wedding, but no one has told Lara. It’s a well-known trope in romantic fiction to have the two main characters at each other’s throats to begin with, but here I felt there was so much bad feeling they might never get past it.

I chose to read and review this book because of the cat; and I preferred the original title. I enjoyed the descriptions of Chester (a city I used to know quite well as I lived just over the border in North Wales). Being a wedding planner is also a common theme, but having the office in a summer house in her garden gave it a modern feel and she had such an easy commute.

The characters (some more likeable than others) are believable, and there is a lot of humour in the descriptions of the weddings and her conversations with her mother. I’ve not read anything by Tilly Tennant before, but I thoroughly enjoyed The Break Up and would definitely recommend it. Thanks to the author, publisher and NetGalley for a copy in exchange for an honest review.