Rizzio is the first book in the Darkland Tales series, where Scottish authors focus on a historical event and view it through a modern lens.  On March 9th 1566, Mary Queen of Scots’ private secretary, David Rizzio, is murdered in front of her, during a supper party in her private chambers. Encouraged by his father, Mary’s husband, Darnley, is one of the conspirators. Known to be frustrated by his lack of power, as he is only her consort, not king in his own right, Darnley is easily manipulated by those who stand to lose their estates and power, and wish to remove her from the throne – her only crime is to be Catholic and a woman.

Having grown up in Scotland, I knew a bit about Mary Queen of Scots, but had never come across this story before. Denise Mina’s fresh interpretation brings it to life in a way that no text book ever could; it is historical fiction viewed through the filter of a crime novelist. It is a short novella and I read it in one sitting, but it left me hungry to know more. Told from the point if view of an omniscient narrator, you do not just read this story, you feel as if you are right in the middle of the action. The characters are well drawn, easy to distinguish, and the vivid descriptions of the clothes, food and furnishings add authenticity. The facts are known, but Denise Mina’s excellent writing turns it into a tense, gripping and emotional narrative. It is a very dark tale of greed, the desire for power, and the fragile position of women in society. I really enjoyed Rizzio, and am keen to read the other volumes in this fascinating series.

Having enjoyed DL Marshall’s debut novel, Anthrax Island, I did not hesitate to try Black Run and was not disappointed. Barely recovered from his previous adventure, John Tyler is back, and this time his mission is to capture a heavily protected target and bring him back to the UK. The story alternates between the present, and the previous two weeks in the Alps where Tyler and his team were observing the target. This means the full story is only slowly revealed, but the short chapters keep the action moving along at a breakneck pace.

The book opens with a dramatic car chase as Tyler is pursued all the way to the French port of La Rochelle where he has arranged to board the Tiburon, a rusty freighter crewed by smugglers and mercenaries. The graphic descriptions of the conditions on board the ship, and the stormy seas as they sail through the night, make the isolation and danger all too vivid. The fact that Tyler doesn’t know who he can trust just adds to the tension. He is a skilled and resourceful operative, despite his flaws, and I look forward to reading the next book in this series. There is a cinematic quality  to the narrative that would make for a great action movie. Thanks to Canelo and NetGalley for a digital copy to review.

Waiting for Sunshine by Jane Sanderson

I really enjoyed Jane Sanderson’s previous novel, Mix Tape, so was keen to read Waiting for Sunshine. Chrissie and Stuart are members of a successful rock band and have a good life, but long for a child of their own. They are in the process of adopting and finding it very stressful. They have been disappointed when previous attempts fell through, but now their adoption of three-year-old Sunshine looks like it might finally go ahead. Sunshine is a delightful child, but there is a mystery surrounding her past and how she came to be put up for adoption that is slowly revealed as the story progresses.

The characters are well written and believable, but I thought Chrissie’s behaviour was a bit unreasonable and rather irritating at certain points in the story. In the second half of the book, family secrets are revealed that change everything she previously believed to be true, and she has a lot to come to terms with. The ending is satisfying as it ties up all the loose ends. I liked the musical references, especially Sunshine’s favourite Beatles’ song. I enjoyed Waiting for Sunshine, and will definitely look out for other books by this author. Thanks to Penguin and NetGalley for a digital copy to review.

One For Sorrow by Helen Fields

I recently read The Shadow Man by Helen Fields and enjoyed it very much, so decided to go ahead and read One For Sorrow even though I knew it was the seventh book to feature DI Luc Callanach and DCI Ava Turner. I normally prefer to start at the beginning of a series, but had no trouble reading this as a standalone, and also have six more books to look forward to.

One For Sorrow opens with the shocking death of Ava’s friend, the pathologist Ailsa Lambert.  What follows is a series of bombings aimed at hurting as many of the emergency services as possible. They are tipped off and led into a trap by a very twisted killer who knows they have no choice but to respond. Parts of this story are very difficult to read, but also hard to put down. The story is told solely from DCI Turner’s point of view, and it takes a long time to work out the reason behind the horrific attacks, which keeps the reader turning the pages.

The story is told mainly in the present with occasional chapters headed ‘before’ that relate to a young woman called Quinn becoming involved with a man who resorts to coercive control, stalking and date rape before she sees him for what he is and breaks up with him. The two narrative strands continue with no obvious link between them. Both stories are equally compelling as you try to work out how they are connected. The police are also struggling to find any leads as to who is responsible, making it difficult to predict who the next target will be.

One For Sorrow is a cross between a police procedural and a psychological thriller. There are lots of twists and turns before the bomber’s identity is finally revealed.  The characters are well drawn and convincing, often resorting to the usual black humour and banter to offset the grim reality they face every day. It is a tense and gripping read, with a strong sense of place and a shocking ending. I hope Helen Fields does not make us wait too long for the next book in this series. Thanks to Avon and NetGalley for a digital copy to review.

The Man on the Street by Trevor Wood 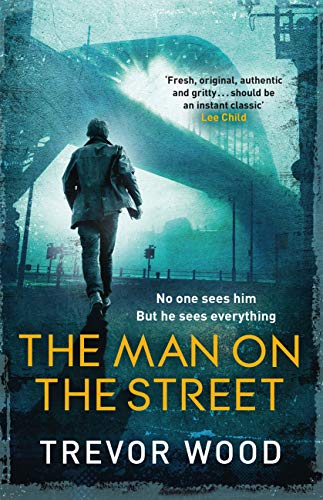 The Man on the Street is the first book in the trilogy featuring homeless veteran Jimmy Mullen. In Newcastle, Jimmy is sleeping rough on the quayside, with just his dog for company, when he wakes and thinks he sees a murder. He still suffers from hallucinations, flashbacks and nightmares due to his untreated PTSD, and has a difficult relationship with the police, and doubts they would believe him anyway, so he does not report it, but it preys on his mind. It is only when he sees the missing person poster several weeks later that he feels compelled to come forward and help Carrie find out what happened to her dad.

Jimmy is an unusual protagonist in a crime novel, although during his service in the Falklands he was a navy regulator (military police) so has some relevant skills. Needless to say, the police don’t take him seriously so he agrees to continue assisting Carrie in her search for the truth. He has a strong moral compass and, despite having lost everything that mattered to him since leaving the armed forces, he wants to see justice done no matter the cost to his own safety.

The interactions between Jimmy and his two mates, Gadge and Deano, provide a bit of light relief amid the darkness. This sympathetic portrait of a damaged veteran is both uplifting and heartbreaking at the same time, and shows us beyond the stereotype to the real person underneath. The plot moves along at a fair pace, the characters are well drawn and believable, and the ending paves the way for the next book, One Way Street, which is already lined up on my kindle. I would not be surprised if this was made into a TV series.