The Summer of Love and Secrets by Helena Fairfax

The Summer of Love and Secrets is a beautifully written and heartwarming account of how grief and the loss of a loved one can impact on the lives of those left behind.

There is real emotional depth to the writing; we see the story from the point of view of both main characters and this gives the narrative an added dimension. Kate is grieving for her photographer husband, Stuart, who was killed in Afghanistan, and trying to keep their son, George, safe. Paul, Stuart’s friend and George’s godfather, stays in touch but keeps his distance.

As the story unfolds we learn that it is dangerous to presume we know how someone feels purely by their actions. This is the second book I have read by Helena Fairfax (the first was Penny’s Antique Shop of Memories and Treasures) and it won’t be the last.

Their Lost Daughters by Joy Ellis

This is another great story from Joy Ellis, with a new team of detectives, DI Jackman and DS Evans. I am a big fan of Joy Ellis’s writing, especially her ‘Fens’ series featuring DI Galena and DS Easter.

Although set in the same part of the country, the Lincolnshire Fens, with the same atmospheric sense of place, this new team of detectives is very different; they are less troubled and there is more emphasis on solving the crimes and less on their private lives. Even when they are overwhelmed by several apparently unrelated cases, they rise to the challenge and catch the villains. The characters jump off the page, making it very easy to become completely immersed in the story.

Many thanks to Joffe Books for the ARC in exchange for an unbiased review. 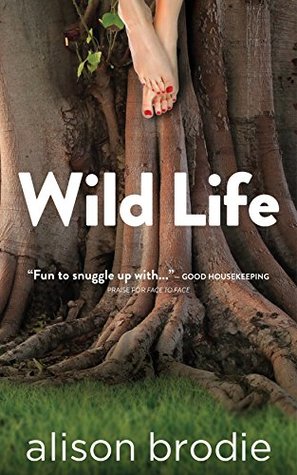 You don’t read an Alison Brodie novel expecting a run-of-the-mill, predictable story. McPherson wants to build houses, as he believes every child should have somewhere decent to live, but to do this he will have to cut down ‘Old Bob’, a tree that Faustine associates with memories of her late mother.

They both have equally valid reasons for what they are doing; the reader can see both sides of the argument, and we start to wonder how the situation can be resolved without one of them losing out. Their attempts to outdo each other at the beginning of the book are hilarious.

However, they put their differences to one side when it becomes obvious that Oscar is urgently in need of help to prevent him going off the rails. Despite putting up a very street-wise front, and having seen things no child should have had to, underneath he is very vulnerable.

So much more than just a romantic comedy, Wild Life deals with some very serious issues but in a sympathetic way. Using humour is very powerful and enables Alison to get the points across without preaching.

All three main characters are emotionally damaged, complex and flawed individuals who evolve as the story progresses. At times, the twists and turns of the plot push the bounds of credibility, but somehow it all comes together in a satisfying finale.  I really enjoyed this book and look forward to reading her next one.

Thanks to Alison for a copy of Wild Life and this is my unbiased review.

Valley of Death by Scott Mariani

I have been a fan of the Ben Hope series of novels since the beginning, and Valley of Death did not disappoint. Set in India, he must find out what happened to an old friend. This puts him in the path of some very ruthless people.

While this could be read as a standalone thriller, I would recommend starting with the first one (The Alchemist’s Secret) to get a better picture of how this character has evolved. This series is all about Ben Hope; the details may change, but he is always the same –  you can depend on him to go the extra mile, and do what he does best.

You will travel the world, and get a history lesson into the bargain, but ultimately Ben Hope will save the day. Sometimes it’s easy to forget he’s a fictional character as he is so well written, flaws and all.

What makes him different is that he does not glorify the violence, but simply uses it as a means to an end. This is the nineteenth book in the series, and I hope Scott has no plans to retire Ben Hope any time soon.

About Face by DE Haggerty

Having previously read and enjoyed DE Haggerty’s Not So Reluctant Detective series, I was pleased to be able to read and review About Face. After a serious car crash, Frankie is recuperating in the suburbs at her grandparents’ house. She is now facing months of physiotherapy to enable her to walk again on her injured leg.

As a distraction, her grandma tries to set her up with her friends’ grandsons, much to Frankie’s dismay (and our amusement). Brodie is her physio and when she asks him to pretend to be her date, to stop Grandma inviting any more weirdos to dinner, he surprises her by asking her out for real.

Frankie is on a steep learning curve, gradually coming to terms with how shallow her life and her friends were before her accident. It turns out they were not true friends after all. With the support of her grandma, her assistant, Jackson, and her new friends Shelby and Brodie, will she be able to move on?

The story is narrated in the first person so we only get Frankie’s view of what’s happening. I would have quite liked a bit of insight into what some of the other characters were thinking.

My only slight criticism is that I would have expected the writer to fill in some of the backstory about the car accident. Frankie seems a bit fixated on her facial scar and takes a lot of convincing that it’s not the first thing people notice about her, but I suppose that’s only to be expected. I also thought that Francis was the male version of her name, but maybe that’s only in the UK?

There is a lot of humour, and a cinematic quality to the story – I think it would make a great rom-com. I also hope we hear more about Shelby in another book.