The Pretender's Gold by Scott Mariani

The Pretender’s Gold is the twenty-first action-packed thriller featuring Ben Hope. I have loved this series right from the start, and this one does not disappoint.

Boonzie McCulloch, Ben’s old friend and mentor, has gone to Kinlochardaich in northern Scotland to rescue his nephew from a bit of bother. When his wife has not heard from him for a few days, she calls Ben Hope. Not knowing much about what he is getting into, he sets off in search of Boonzie.

What follows is a character-driven, fast-paced action thriller (with a historical element) that will keep you on the edge of your seat until the very end. Ben Hope is definitely the one you want on your side in a crisis.

I really enjoyed that The Pretender’s Gold was set mainly in my home country of Scotland; Scott Mariani really brings the beauty and remoteness of the highlands to life. Not long to wait now until the next Ben Hope adventure, The Demon Club, is published in November.

I have read and enjoyed all of the DCI Ryan novels by LJ Ross, but Borderlands just did not quite live up to expectations. The elements that drew me to this series are still there – strong sense of place (Northumberland) and well-written main characters (especially the relationship between Ryan and Frank) – but this story lacked focus as the team were all engaged in different directions. The plot left a lot to be desired as some of the supposed links were never explained. The ending was very unsatisfying with more questions than answers.

I thought there was too much emphasis on the home lives of the detectives. The sheer improbability of them all living and working with their partners has become far too cosy, and would not be allowed in real life (I know it’s fiction, but it still jars).

I agree with a lot of the other reviewers that this book felt a bit rushed, and would prefer fewer books each year, but to a higher standard. Nevertheless, I will continue buying this series, mainly because of Ryan. I have the latest one, The Shrine, lined up on my kindle, and look forward to reading it very soon. 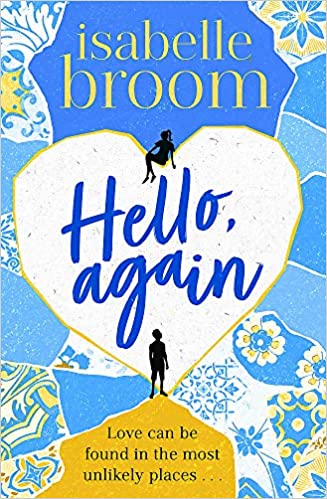 Pepper runs art classes where she helps others to realize their artistic potential, but has no faith in her own talent. She has lived all her life in the Suffolk coastal town of Aldeburgh, where a family tragedy has haunted her for the past twenty years. When her elderly friend, Josephine, requests her company on a trip to Europe to revisit old haunts associated with her first love, Jorge, Pepper decides the time has come to broaden her horizons.

It is in Portugal that Pepper first meets and falls in love with Finn, who runs a restaurant in Hamburg with his friends; he is also in the process of setting up a website for artists to display and sell their work. He and Pepper are trying to make their long distance relationship work when something happens that puts all their plans in jeopardy – no spoilers here though, so you’ll have to read Hello, Again for yourself to find out.

Lisbon is described by Isabelle Broom with an artist’s eye – the pictures made from brightly coloured mosaic tiles everywhere they look, rows of houses where each one is a different pastel hue, and the Banksy-style arty graffiti decorating the walls. I started out knowing nothing about the city but would definitely love to go there now. Same goes for Barcelona with its colourful, vibrant streets and all the wonderful buildings designed by Gaudi.

Hello, Again is a beautifully written story with vivid descriptions and totally believable characters. At the beginning, Pepper seems weighed down by grief and guilt at the loss of her sister so many years before, but when Josephine encourages her to spread her wings, and Finn convinces her that she is talented, she takes the first steps on the road to recovery.

This is the first book I have read by Isabelle Broom, but I fully intend to explore her back catalogue as soon as I can. Thanks to the author, Hodder and NetGalley for a review copy. 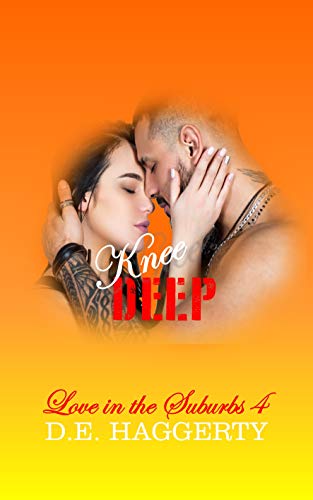 Knee Deep is the fourth and final book in the ‘Love in the Suburbs’ series, and tells the story of Violet and Luke, former high-school sweethearts, brought into each other’s orbit again by mutual friends. They definitely have unfinished business!

DE Haggerty has been hinting at their secret since Grandma unsuccessfully tried to pair Luke off with Shelby in the second book, though they did remain friends. Violet started working for Frankie and Jackson at F&J’s Events in the third book, and sparks flew whenever she and Luke came into contact with each other.

Obviously, there was no way they could keep their past a secret for very long with Grandma and the rest of the gang nagging away at them. Lack of communication and jumping to conclusions are behind the bad feeling that exists between Luke and Violet. Thrown together at various parties and weddings, they have to learn to trust one another again, as the attraction between them is as strong as ever.

Right from About Face (the first book in the series), Grandma has stolen the show. I’ve said it before, but she is hilarious on the page, but would be a nightmare in real life as she does not respect anyone’s boundaries. She means well, but just can’t keep her nose out of everyone’s business as she goes about her matchmaking.

Told alternately from the points of view of Violet and Luke, we get both sides of the story. There is not much in the way of plot, but with the weddings of both Shelby and Jackson, and Bailey and Roman, and the associated fuss of the hen (bachelorette) parties, the story moves towards a satisfying conclusion.

As you would expect with a group of young people who spend a lot of time together, there is a lot of banter; the slang is very American and I didn’t always ‘get’ it, but it didn’t detract from my overall enjoyment of the story. This series has definitely run its course. It is quite difficult to sustain the reader’s interest, as there tends to be a lot of repetition, but well-drawn, likeable characters go a long way to making up for that. 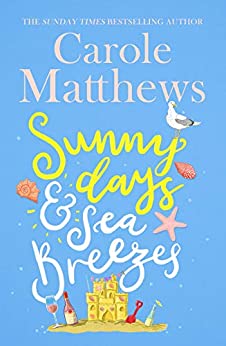 I have read and loved all of Carole Matthews’ books, and Sunny Days and Sea Breezes was no exception. Needing some time alone, Jodie escapes to the Isle of Wight and her brother Bill’s houseboat, Sunny Days. Cue the arrival of Marilyn, hired by Bill to clean the houseboat and look out for his sister. Jodie has never met anyone like her before, with her flamboyant clothes and unusual turns of phrase, but Marilyn turns out to be exactly what she needs.

Gradually the other people she meets in Cockleshell Bay – her neighbour Ned, living statue George, and Ida who runs the café – enable her to see that what will help her most is to loosen up, and try new experiences, not hide herself away from the world.

Eventually her past catches up with her, and she has to return to reality. Carole Matthews deals very sensitively with some extremely upsetting subject matter in Sunny Days and Sea Breezes – loss of a child, grief and infidelity – but still delivers an entertaining and uplifting tale full of hope and the importance of friendship.

The first person narrative works well because we have to wait for Jodie to gradually reveal what has happened to cause her so much pain. All the characters are well drawn and believable, but not all are particularly likeable. I thought Della was behaving oddly from the start, but had no idea of the depth of her treachery. No spoilers, but there is a scene at the gym involving her handbag and clothes that is just priceless.

I believe Carole Matthews wrote Sunny Days and Sea Breezes after enjoying a holiday on the Isle of Wight, and this shines through the glorious descriptions of life on the island. I am definitely keen to take a trip and see for myself.

Thanks to the author, Sphere and NetGalley for a review copy.