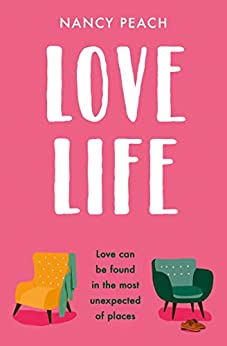 Tess is a doctor working in a hospice as part of her training to be a GP. When Mary is admitted with terminal cancer, her son is angry and obstructive as he can’t accept she is dying and wants her to undergo more treatment even though it will make no difference to the outcome. Tess realises that she has met Edward before, but he gives no indication he remembers her.

A hospice might not be the ideal setting for a romance novel, but this part of the story is handled with great sensitivity. Also Love Life cannot really be described in this way as romance plays such a small part in it.  A lot of difficult topics are introduced, but only explored in a superficial way, and perhaps some could have been omitted without adversely affecting the story. A case in point is Tess’s struggle with bulimia; it is mentioned several times but never really resolved.

The story is mostly told from Tess’s point of view, with occasional contributions from Edward. Tess struggles a lot with self-doubt and battles with the critical voices in her head, who take the form of an acerbic talk-show host and Jane Austen. While this is an interesting trope, I found it interrupted the flow of the narrative, and thought the talk-show host’s voice was unnecessarily vicious.

The story is well written and the characters are believable (plus there is a cat). I would have liked to hear more from Mary’s point of view as she was an interesting character. I also liked the Jane Austen references throughout the book. Love Life is an assured debut novel and I look forward to reading Nancy Peach’s next book.

I was offered a copy of Love Life by the publisher in exchange for an honest review. Thanks to NetGalley and HarperCollins/One More Chapter for providing the digital copy.

A Numbers Game by RJ Dark

The Numbers Game takes place in and around the fictitious Blade’s Edge estate in Yorkshire where the main characters, Malachite Jones and Jackie Singh Khattar, grew up. We get a warts and all portrait of life in one of the roughest council estates in the area, but tempered with nostalgia and affection. Mal is tasked with finding the £8m winning lottery ticket that disappeared after the death of Larry Stanbeck, a member of the most powerful criminal family in the district.

Everywhere Mal turns someone is threatening him with violence as he tries his best to find the ticket. It’s a good job Jackie has got his back. The relationship between Mal and Jackie is at the heart of The Numbers Game. It also features a large cast of interesting supporting characters that are well drawn and easily differentiated. The story is fast paced as the action takes place over the course of just a week. I understand that the author usually writes fantasy novels and this is his first foray into crime fiction. I really enjoyed this introduction to Mal and Jackie, with its dark humour and vivid sense of place, and look forward to reading the next book in the series, Incy Wincy.

Thanks to Wavesback and NetGalley for a digital copy to review.

Just Haven't Met You Yet by Sophie Cousens 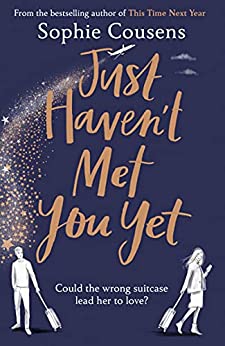 In Just Haven’t Met You Yet, Laura spends her working life interviewing couples about their larger-than-life love stories. This, together with what she has been told about her parents’ relationship, has given her a rose-tinted view of romance that none of her previous relationships has ever lived up to.

On a work trip to Jersey to revisit places that were special to her parents, and write an article about it, she ends up with someone else’s suitcase. On opening it, to try to find out who it belongs to, the contents lead her to believe the owner would be her Mr Right if only she could track him down.

Laura reminded me of Bridget Jones in that some of the humour was of the cringeworthy variety and often at her expense. Told solely from Laura’s perspective, Just Haven’t Met You Yet is not just the lightweight romantic tale that is promised on the cover, but also a heartbreaking story about family secrets. The supporting cast of memorable, quirky characters are well drawn and gradually help her to discover what she really wants to do with her life.

Jersey is a wonderful setting and beautifully described by the author who clearly has great affection for the island. There is a cinematic quality to the story and I could see it being made into a movie. The action takes place over just a few days so the pace is fairly brisk. I did not always find Laura particularly likeable, and the whole suitcase mix-up dragged on a little too long, but overall I enjoyed reading Just Haven’t Met You Yet and look forward to whatever Sophie Cousens writes next.

Thanks to Arrow and NetGalley for a digital copy to review.

The Start of Something by Miranda Dickinson 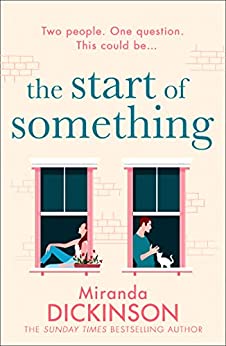 Bethan has just rented a new flat and is decorating prior to moving in with her three-year-old son, Noah, when Lachlan sees her from his window opposite. He is an army officer stuck at home recovering from an accident and, feeling a bit isolated, he reaches out to her with a note in his window.

I had not read anything by Miranda Dickinson for many years, since Fairytale of New York, but thought I’d give The Start of Something a try and I was not disappointed, though I did have some reservations. I thought the ‘notes in the window’ was an interesting premise for a romance novel, but here it did not develop in the direction I was expecting it to. Although the main characters were well written and fully developed, there was not enough interaction between them for me to believe in their fledgling romance.

The story is told in alternate chapters by Bethan and Lachlan, so we get a rounded picture of what is going on in their lives. They are both hiding something about themselves that they think the other will judge them for, and this leads to some really strange behaviour. Their backstories are gradually revealed, layer by layer, until the full horror of what each of them has been through comes to light.

I liked that there was more going on here than just the notes in the window. Noah was delightful, as were Ernie and Bert, Lachlan’s cat and dog. Bethan’s colleagues at the garden centre were (mostly) lovely, and I enjoyed reading about what they managed to accomplish there. As for the investigation into the accident Lachlan was involved in, I simply couldn’t understand why it took him so long to see his ‘friend’ for what he really was.

Overall, I enjoyed The Start of Something and look forward to the next book by Miranda Dickinson. Thanks to HarperCollins and NetGalley for a digital copy to review.

Love on Location by Lynne Shelby

In Love on Location, Laurel is tasked with rewriting the script of the time-slip movie Swords and Sandals, only to find she has been paired up with an archaeology professor to ensure historical accuracy. As Laurel is used to working alone, there is a bit of friction between them to start with but, knowing they have no choice but to make the best of it, they slowly come to appreciate each other’s expertise.

I have read and enjoyed Lynne Shelby’s previous books based in the world of film and theatre. She always shows both sides of working in the entertainment industry, and balances the glamour with a realistic portrayal of the hard slog and disappointments behind the scenes. Here we get fascinating glimpses behind the scenes on a film set, and find out just how temperamental a director can be.

The large cast of characters are well written and believable, though there were one or two occasions when Laurel and Jason’s behaviour did not ring true.  The idyllic Greek locations are depicted in vivid detail – I particularly enjoyed the sojourn in Athens as Jason shows Laurel round the ancient sites and explains the history behind them. The only aspect I had a slight problem with was that someone who writes screenplays for a living would not read books.

I really enjoyed escaping to the Greek island of Kyros, and look forward to Lynne Shelby’s next foray into life in the entertainment world. Thanks to Headline Accent and NetGalley for a digital copy to review.